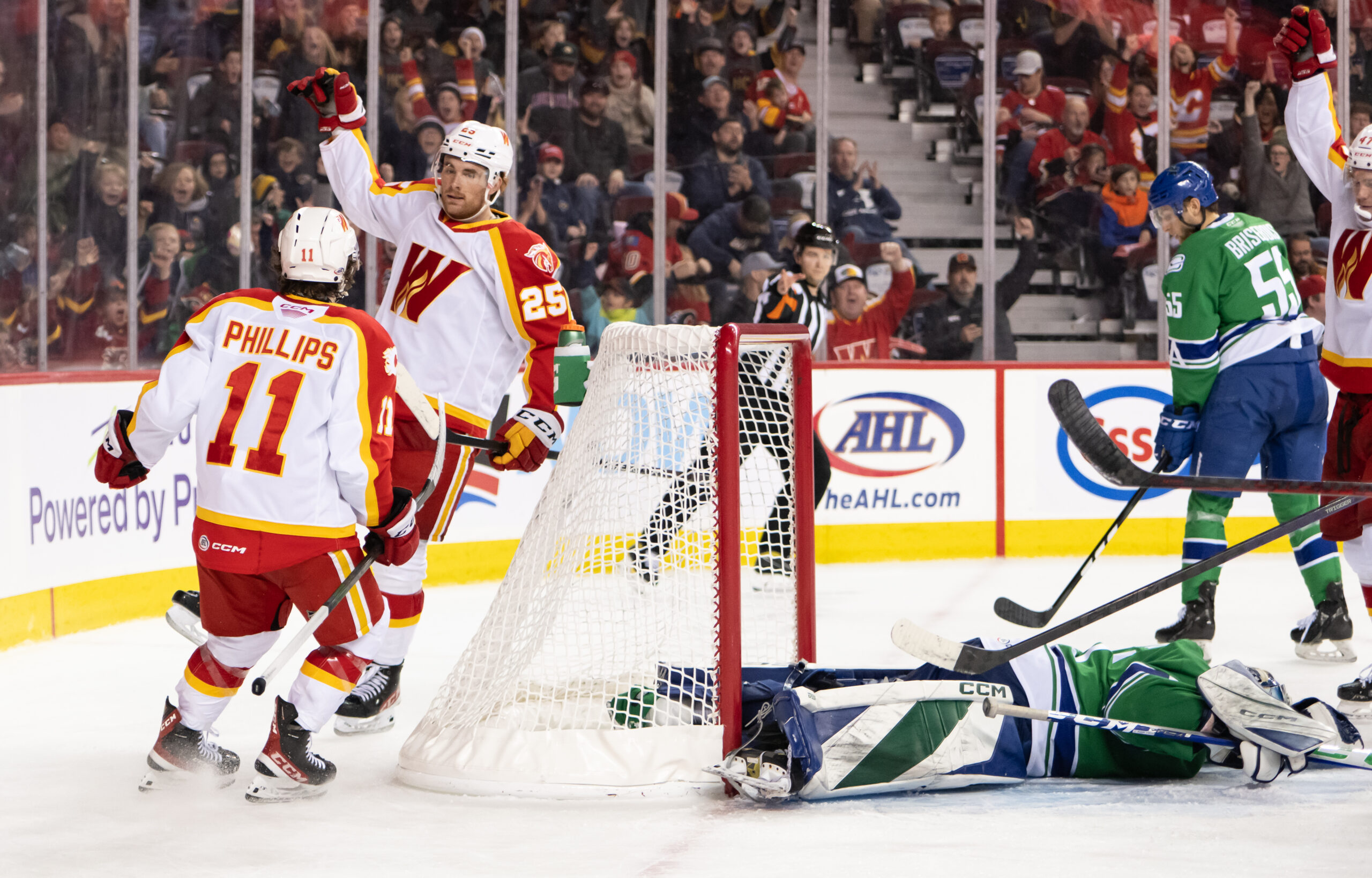 The Wranglers powerplay will make you pay.

Calgary came out on top of a thrilling 4-3 overtime victory over the Abbotsford Canucks, scoring three times on the powerplay (3/5) in front of 5,783 raucous fans at the Scotiabank Saddledome on Sunday afternoon.

Jakob Pelletier scored to extend his scoring streak to 10-games, Matthew Phillips had three assists, while Walker Duehr put his skill on display notching his sixth goal of the season with a terrific toe-drag effort.

Ben Jones contributed a three-point afternoon with a goal and two assists, which earned him First Star honours.

Jeremie Poirier would play the hero for the Wranglers in extra time, scoring his third goal of the season late to win it.

After having the night off last game, Dustin Wolf was back between the pipes for Calgary, making 35-saves to pick up his 10th win of the season. (10-3-0-1) He leads all AHL goaltenders in wins this season.

The Wranglers are the highest-scoring powerplay team in the league so far this season, and they showed why midway through the frame.

Pelletier finished off a nifty tic-tac-toe passing play with Phillips and Jones, wiring home his ninth of the season. Duehr would add to the lead a few minutes later, scoring his sixth goal of the season with a dazzling toe-drag shot that eluded Canucks netminder Arturs Silovs to make it 2-0.

However, with five-seconds left on the clock and Abbotsford on the powerplay, Christian Wolanin lit the lamp to cut into the lead.

More Canucks in the second, as they peppered the net all period long. Eventually, Chase Wouters would tie the game 2-2 with his first goal of the season for Abbotsford.

The tie wouldn’t hold though, as the Canucks got into penalty trouble late in the period and the Wranglers lethal powerplay capitalized once again. This time it was Jones who converted, scoring his fourth goal of the season and third point of the game, to give Calgary the edge heading into the break.

The third period was tight-checking, until Noah Juulsen tied the game for the Canucks with less than five minutes to play, forcing OT. Once again, Abbotsford took an undisciplined penalty late in the extra frame, and Calgary converted.

Pelletier took the initial shot from the slot, which bounced out onto the stick of a pinching Poirier who fired the puck into the back of the net to win the game.