Wranglers Back In The Win Column 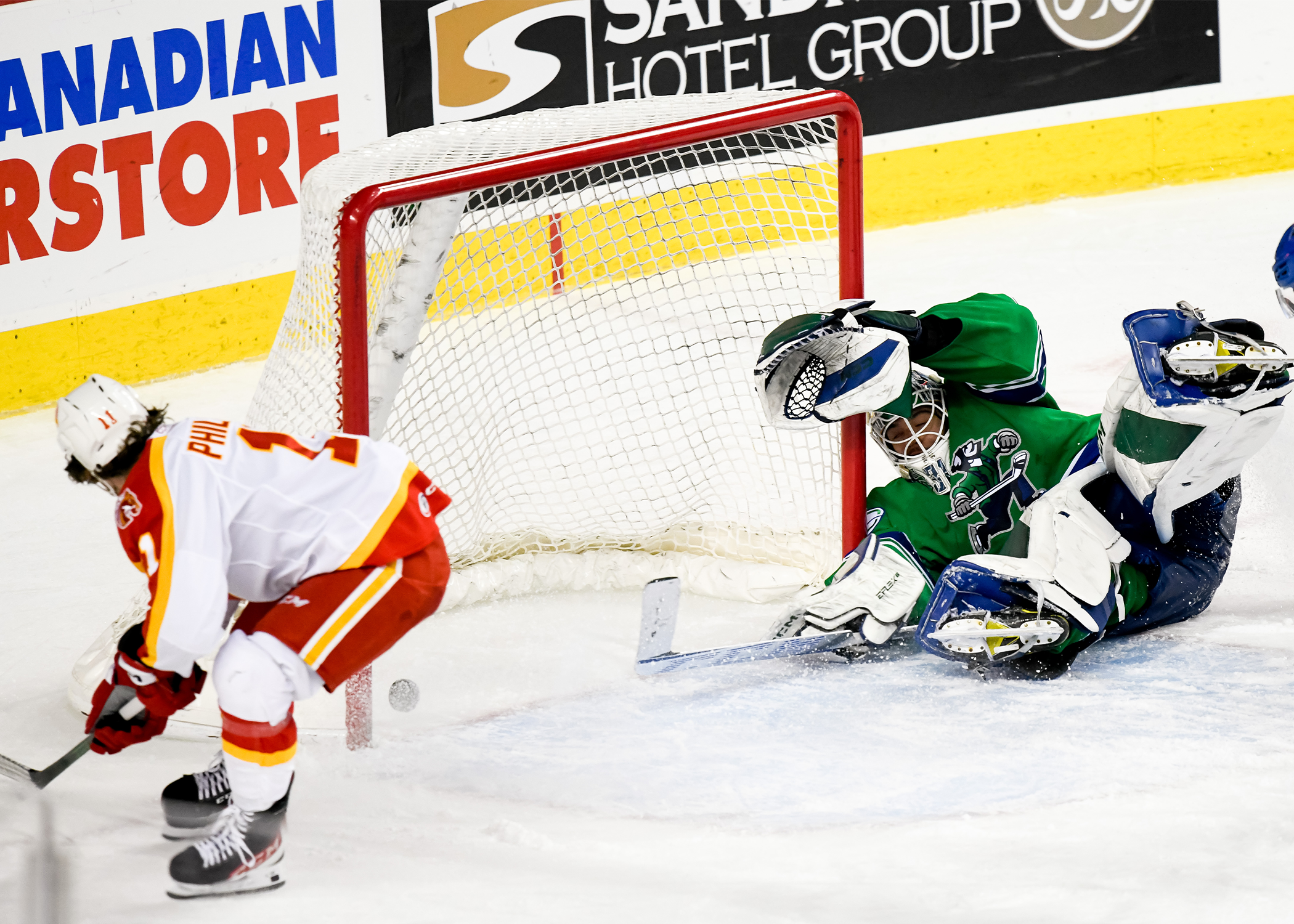 Three goals in the third period made the difference as the Wranglers got back into the win column against the Abbotsford Canucks, defeating them 3-0 at the Scotiabank Saddledome on Wednesday night. It’s the 22nd win for Calgary this season, which has them sitting in top spot in the Western Conference and tied for most wins in the AHL.

Brett Sutter scored his ‘champagne’ goal, the seventh of the season for No.7, while Matthew Phillips notched his 19th of the season and added an assist. Mitch McLain put the game out of reach with a long distance shot into an empty net to seal it for the Wranglers in the final minutes.

Dustin Wolf did the rest, turning aside 29 shots to register his league-leading 19th win of the season and fourth shutout.

It was a goaltender’s duel in this one, especially early on.

Calgary came out with an extra jump in the first period firing 14 shots on the Canucks net in the frame, but Abbotsford netminder Arturs Silovs was solid in net keeping his team in the game early. On the other side, Wolf turned aside all eight shots he faced to keep the game scoreless through 20-minutes of play.

Both teams traded chances in the second period, yet neither could capitalize on their opportunities. The Canucks began to push the pace late in the frame, but Wolf was the difference maker once again, making multiple timely saves to keep the game tied.

Donuts on the board after two periods.

It was a much better third period for the Wranglers, in terms of generating sustained offensive zone time, which eventually led to the first goal of the game. After Phillips’ initial shot was stopped, Ben Jones picked up the puck behind the goal and, displaying great vision, spotted the captain in the high slot. Sutter took the pass, waited out the goaltender and ripped home his seventh goal of the season to give Calgary a 1-0 lead.

Momentum shifted following the goal and the Wranglers would add to their lead minutes later.

Collecting a quick pass from Jakob Pelletier, Phillips walked in alone on the Abbotsford net and, after outwaiting Silovs, slid home his 19th goal of the season. 2-0 Calgary.

The Canucks pulled their goaltender with less than three minutes remaining with hopes of sparking a comeback but did not get the intended result. McLain sealed the deal when he sent a shot the length of the ice into the yawning cage to make it 3-0.

The Wranglers are back in action when they host the Bakersfield Condors on Sunday afternoon at the ‘Dome. Click for tickets.