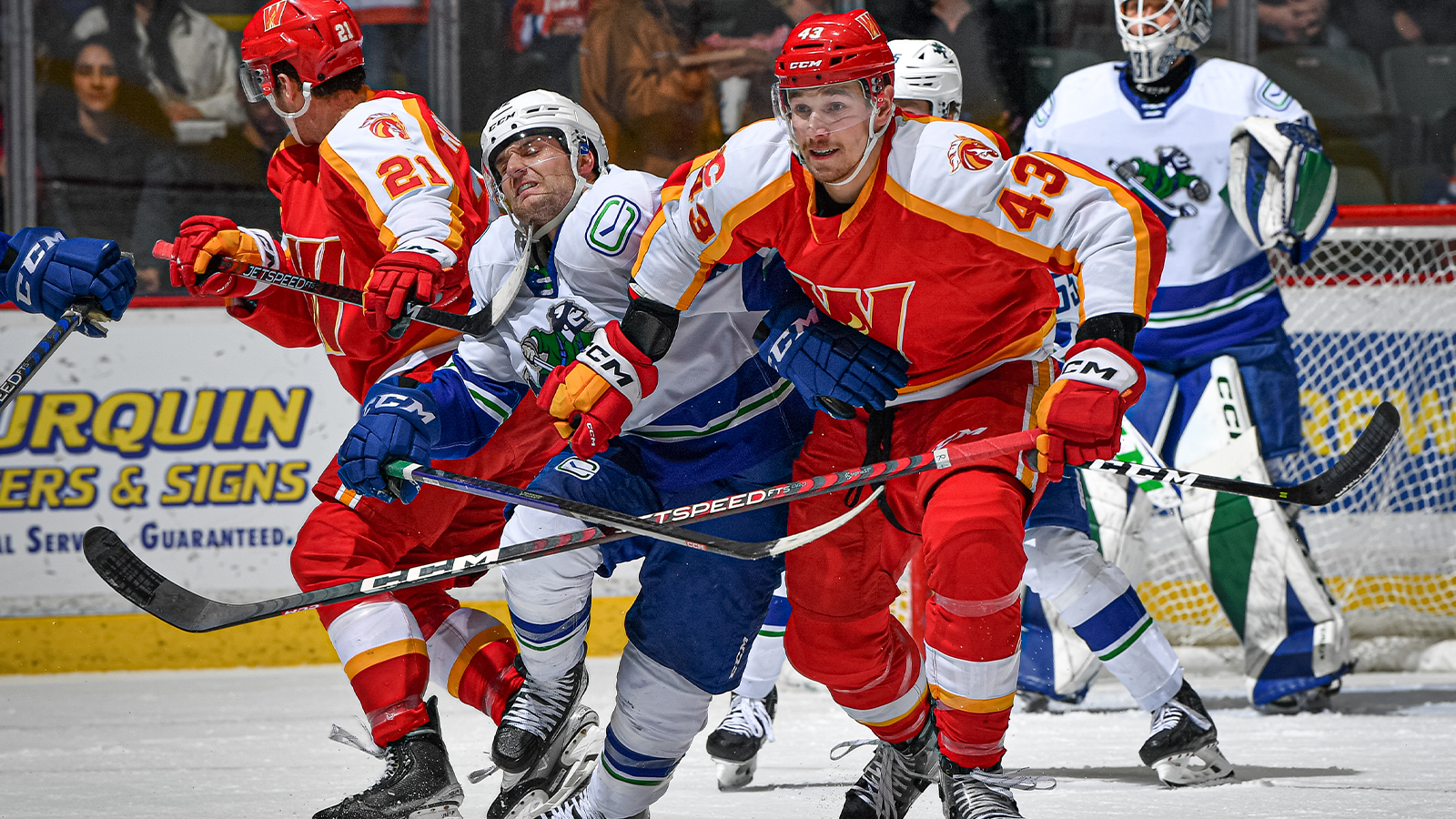 Back in the win column!

The Wranglers were on the road in Abbotsford on Wednesday night facing the Canucks for the first of three-straight games, ultimately walking away with 3-2 overtime win.

Captain Brett Sutter scored a short-handed marker for his eighth of the season, while Colton Poolman notched his second tally for the Wranglers. Matthew Phillips was the hero once again, scoring his league-leading 22nd goal of the season just seven-seconds into overtime to win the game for Calgary.

The penalty-kill went 7-for-7 on the night backstopped by another memorable performance from Dustin Wolf, who was phenomenal between the pipes, making multiple game-saving stops to keep the Wranglers in the game throughout.

Calgary created quality chances in the opening frame, outshooting Abbotsford 17-4 in the first period and, as a result, took a two-goal lead into the break. The Wranglers opened the scoring shorthanded, as Sutter skated across the Canucks blueline and sent a hard shot towards the net. The puck alluded Canucks’ netminder Arturs Silovs, glancing off his glove and into the net.

Later in the period, after Nic Meloche and Connor Zary confidently kept possession in zone, Meloche spotted Poolman who then skated in on net and precisely picked his spot, scoring his second of the season to extend the lead.

2-0 Wranglers at the break.

The Canucks turned the table on the shot clock in the second period, outshooting the Wranglers 15-3 and they would eventually cut into the lead late in the frame. With just 18-seconds remaining in the period, Vasily Podkolzin scored his fifth goal to put Abbotsford on the board.

In the third, Arshdeep Bains scored his fifth goal of the season to tie the game for the Canucks assisted by Christian Wolanin, who notched his league-best 37th assist on the goal. Abbotsford continued to press for the go-ahead goal late in the frame, but Wolf was an absolute game-saver for Calgary, stoning the Canucks on multiple high-danger chances with the clock winding down.

Overtime would be needed to determine a winner, but it didn’t take long.

Right off the opening faceoff, Ben Jones won the scrambled draw, tying up his man and leaving the puck for Phillips to corral. After picking up the puck at centre ice, the league’s leading goal-getter zipped into the zone and whipped a shot on net, changing the angle of his shot ever so slightly to fool the goaltender Silovs, winning the game just seven-seconds into O.T.

It’s the 22nd goal of the season for Phillips and his seventh game-winning goal.

The Wranglers and Canucks face off again this Friday, January 20 at 8pm in Abbotsford.