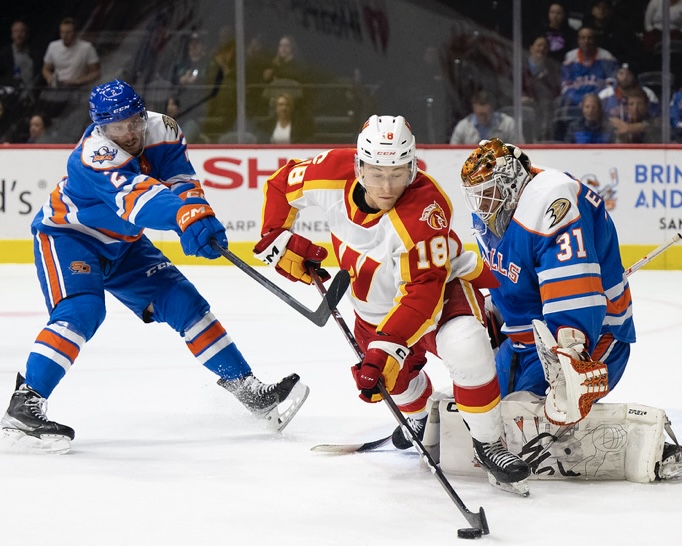 Now that was a full team win.

The Wranglers hit the road to Southern California to take on the San Diego Gulls for two games this weekend, picking up a commanding 7-3 victory Friday night.

Radim Zohorna was named the First Star of the game with a goal and two assists, while Martin Pospisil scored twice in the game, earning Third Star honours.

Matthew Phillips continues to put up points at a torrid pace, notching his 14th goal of the season and adding an assist, while Jakob Pelletier extended his scoring streak to 11 games with two assists in the contest. Ben Jones scored his fifth goal of the season, Walker Duehr picked up his fourth tally in his last three games, and captain Brett Sutter also lit the lamp.

It was the Gulls who came out quickly in the first period.

One minute into the game, Rocco Grimaldi wrapped around the net and sent the puck off a skate in front and past goaltender Dustin Wolf to give San Diego an early  lead. Wolf shut the door on an ensuing Gulls powerplay, making a series of big saves, which seemed to spark the Wranglers offence.

Calgary would tie the game not long after, when Phillips spotted Zohorna in the high slot, who wired home his fourth goal of the season. Minutes later, after receiving a beautiful backhand pass from Pelletier, Pospisil then walked in on net, and slid the puck through the five-hole of Gulls’ goaltender, Olle Eriksson Ek.

Jones extended the Wranglers lead when he scored from a fortuitous bounce off the backboards, tapping the puck in at the side of the net. It was followed up by the fourth goal in three games from Duehr, scored on the powerplay.

📹 Its the dynamic duo of DeSimone and Duehr! #end2end pic.twitter.com/j2EhJSM4bR

The Gulls continued to press early in the second period. Still, the Wranglers found a way to generate chances and capitalize on them.

Pospisil picked up his second goal of the game, showing patience to out-wait the goaltender and then backhanding the puck up top. Then, Phillips registered his team-leading 14th goal of the season in stylish fashion, using some nifty hands to walk in all alone and send a sizzling shot over the shoulder of Eriksson Ek.

Justin Kirkland chipped away with his third goal of the season for the Gulls, but that’s all they would muster.

The lone goal scored in the third period came off the stick of Sutter.  Just 22 ticks into the final frame, he walked in on net and ripped a wrist shot off the post and in, putting the game out of reach.