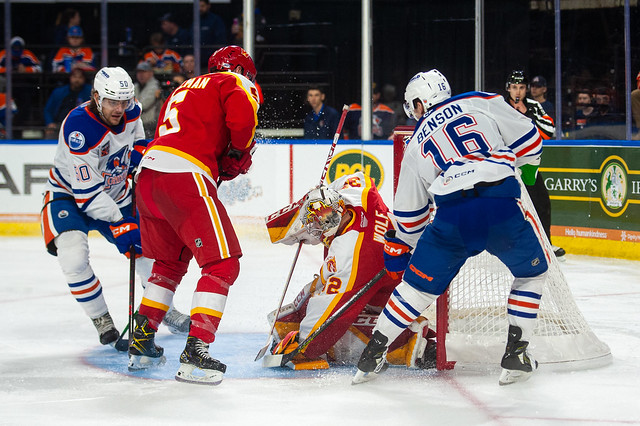 The Wranglers are rolling!

The red-hot club curated a commanding 5-1 win over the Bakersfield Condors in Southern California on Friday night.

The powerplay was prominent in the victory, converting four times on eight chances. Nick DeSimone scored two goals, both on the powerplay, and added an assist to earn the First Star nod for the Wranglers after recently returning from the Flames.

Jakob Pelletier scored a goal and had two assists, while Connor Zary notched a goal and added an assist in the contest, as both players extended their respective scoring-streaks to five games.

Dustin Wolf got the start in net and looked calm and composed all game long, making 22-saves for his seventh win of the season. He has won five-straight decisions between the pipes.

Jeremie Poirier scored his second goal of the season to open the scoring for Calgary in the first period, before the powerplay got to work. DeSimone made an immediate impact in the game. His blast from the point doubled the Wranglers lead to 2-0.

Then, with a late powerplay chance, Pelletier scored to give the Wranglers a 3-0 lead headed into the break. With an assist on the goal, Matthew Phillips registered his 100th-career AHL assist, while Ben Jones assisted on all three goals in the first period.

Calgary was fired up heading into the second period, directing 20 shots on the Condors net. Then, Bakersfield got into penalty trouble  again and the Wranglers took advantage. First, Zary notched his seventh of the season, with a one-timer on the powerplay, followed up by a second powerplay tally from DeSimone with less than a minute to go in the frame to put the Wranglers up 5-0 after forty minutes.

The Wranglers have now scored the most powerplay goals in the league with 21 tallies and are currently ranked second in the AHL operating at 30.4%.

The lone goal for the Condors came in the third period  off the stick of Seth Griffith with less than five minutes to play in the game, ending Wolf’s shutout bid.

However, the Wranglers defensive game was as good as it has been all season long, limiting the Condors to less than 10 shots per period, ultimately outshooting Bakersfield 43-23 in the game.