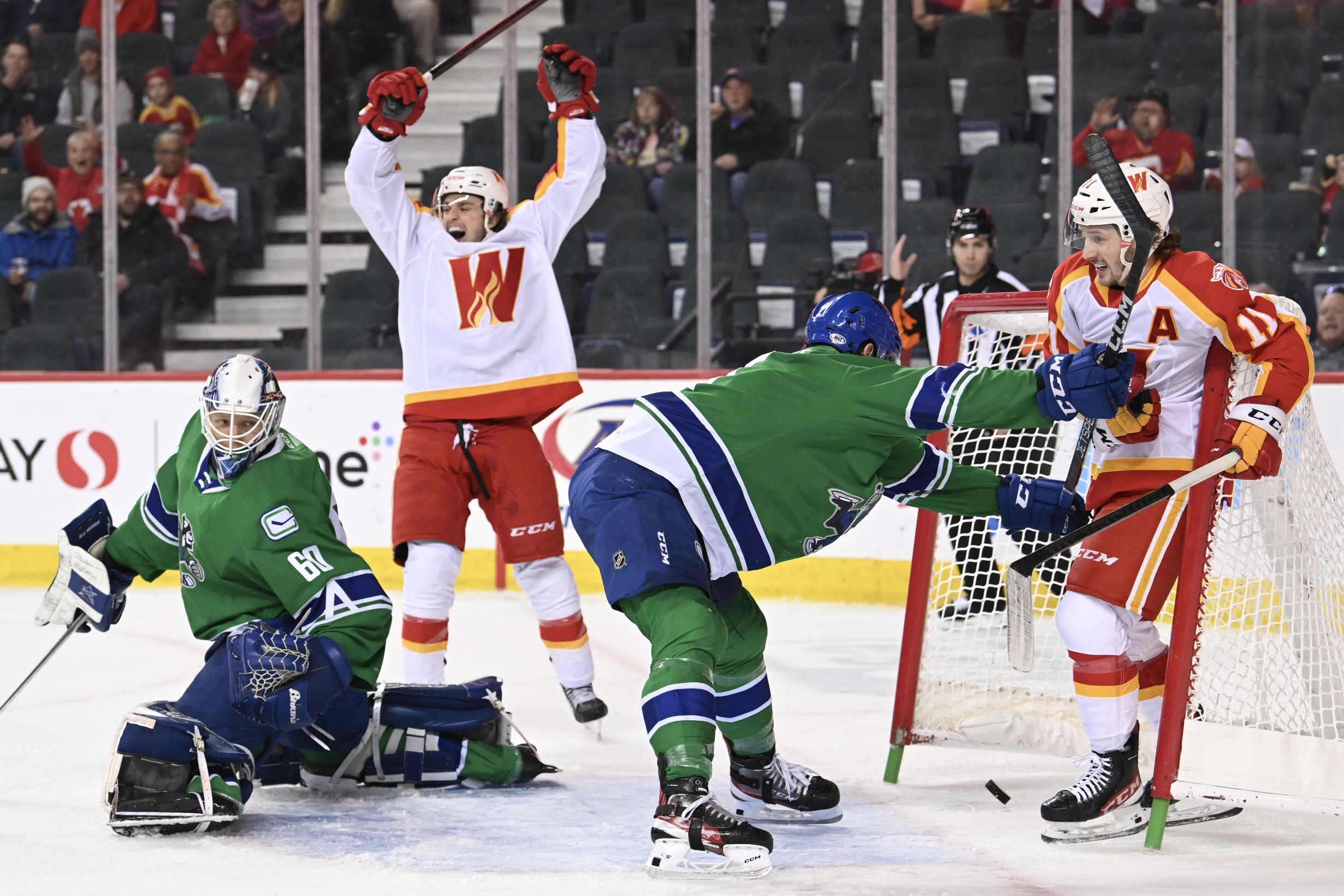 Back in the win column!

The Wranglers hosted the Abbotsford Canucks for the first time this season, picking up a 5-1 win during a matinee matchup at the Scotiabank Saddledome Friday afternoon.

Matthew Phillips led the way with two goals and an assist, and Walker Duehr potted a pair of tallies.  Jakob Pelletier found the back of the net for his eighth goal of the season, extending his scoring-streak to nine games, while Martin Pospisil played in his 100th career AHL game.

Oscar Dansk got the start in net for Calgary,  and turned aside 28 of 29 shots to pick up his first win of the season and earn a second-star nod.

The homeside came out of the gates hot to start the game.

Phillips, in particular, was all over the ice in the first period and he would get rewarded for his efforts when Jeremie Poirier fired a shot from the point to the side of the net, which redirected off Phillips and into the net. Colton Poolman picked up an assist on the goal, registering his first point of the season.

Shots were even at 12 apiece through 20 minutes.

The Wranglers wasted no time adding to their lead in the second period.

Less than two minutes in, Phillips used his speed to advance quickly up the ice, finding himself on a partial breakaway and sent a quick shot glove-side past Canucks goaltender Collin Delia for his 13th of the season.

Late in the frame, after an unsuccessful 5-on-3 opportunity for the Wranglers, the Canucks struck. Christian Wolanin found the puck on his stick in the high-slot and fired it past Dansk to cut the lead in half;  2-1 at the break.

The third period was chippy between the benches, as frustration boiled over on the Abbotsford side. Emilio Pettersen dropped the mitts with Will Lockwood midway through the frame which led to a Wranglers powerplay. Despite the dust-ups, the Wranglers tallied three times in the third.

Duehr scored his fourth goal of the season, walking in all alone and sending a shot through the five-hole of Delia to extend the lead. With the assists on the goal, Pettersen picked up his fourth point in four games, while Connor Zary now has two points in his last two games. Later, at the 10-minute mark, Pelletier notched his eighth goal of the season to extend the lead to 4-1 and keep his point-streak alive.

Minutes after that, with the Wranglers shorthanded, Duehr notched his second goal of the game to round out the scoring.

The Wranglers will face the Canucks in the rematch on Sunday afternoon at 1 p.m. in the ‘Dome.