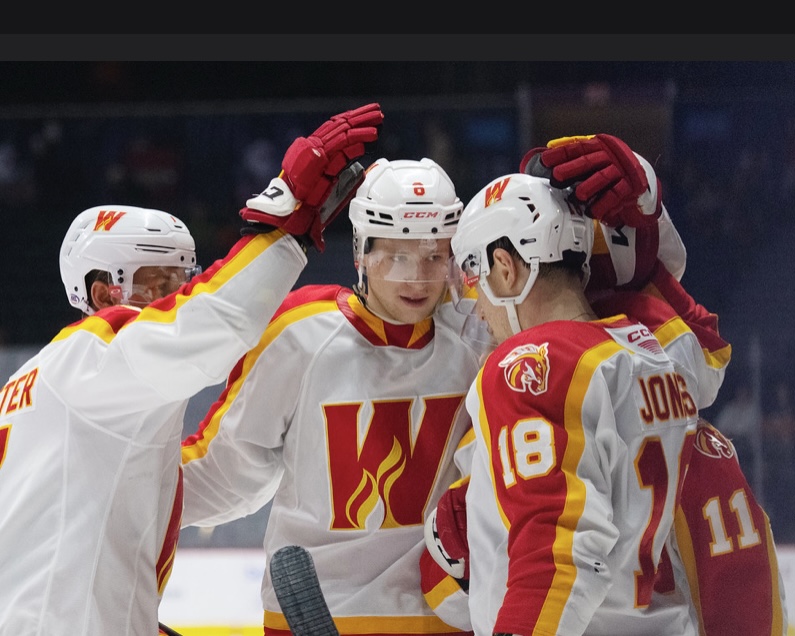 Yup, the Wranglers are officially on a heater.

Dustin Wolf picked up his 12th decision between the pipes and second shutout of the season, turning aside 17-shots for the 6-0 win, as the Wranglers picked up another victory on the road against the San Diego Gulls on Saturday.

Clark Bishop scored twice in the game for Calgary, while Colton Poolman picked up his first goal of the season to open the scoring.

Matthew Phillips was magical once again, extending his point-streak to eight games in style, taking over the AHL goal-scoring lead, while adding an assist to boot.

Radim Zohorna notched his fifth of the season and now has four-points (2g, 2a) in his last two games, while Nick DeSimone netted his fourth goal to round out the scoring.

The Wranglers executed a well-balanced game plan against the Gulls on Saturday night. To summarize: they played a complete game, at both ends of the ice. Start to finish.

They were effective at regulating chances in their own zone in the first period, while outshooting San Diego 19-5 in the opening 20 minutes. Calgary would head into the first intermission with the lead thanks to Poolman, who scored his first goal of the season.

Phillips assisted on the opening goal to extend his point-streak to eight games.

In the early stages of the second period, with the Gulls applying pressure, Wolf made a tremendous save off Jakob Perreault on the breakaway that was certainly worth another look. He absorbed contact in front of the net, but had the wherewithal to swipe at the puck with his trapper, just barely keeping it out at the goal-line.

The officials would review the play to make sure the puck didn’t cross the line, but maybe they just wanted to watch the save again themselves.

Later in the second period, Connor Zary whipped a quick pass cross-seam to Zohorna, who sent the puck into the net for his fifth goal of the season. Then, at the 14:35 mark of the period and with the powerplay ticking away, DeSimone blasted home a pass from Walker Duehr to extend the lead.

And the Wranglers kept coming …

Moments later, Phillips took a stretch pass from Ben Jones and walked in all alone, flipping a magnificent backhand over Gulls goaltender Lukas Dostal for his 15th goal of the season. With the terrific tally, Phillips now leads the AHL in goals (15) and points (30).

It was 4-0 Wranglers at the break.

The Wranglers opted to play a shutdown defensive game to close out the outing in the final frame, limiting the Gulls to just one shot in the third period, while still taking advantage of their offensive opportunities.

Bishop scored his first and second goals of the season, including a powerplay tally, while Alex Gallant assisted on both.

Both teams will meet again soon when the Wranglers host the Gulls in Calgary at the Scotiabank Saddledome on Dec. 9. Click here for tickets.