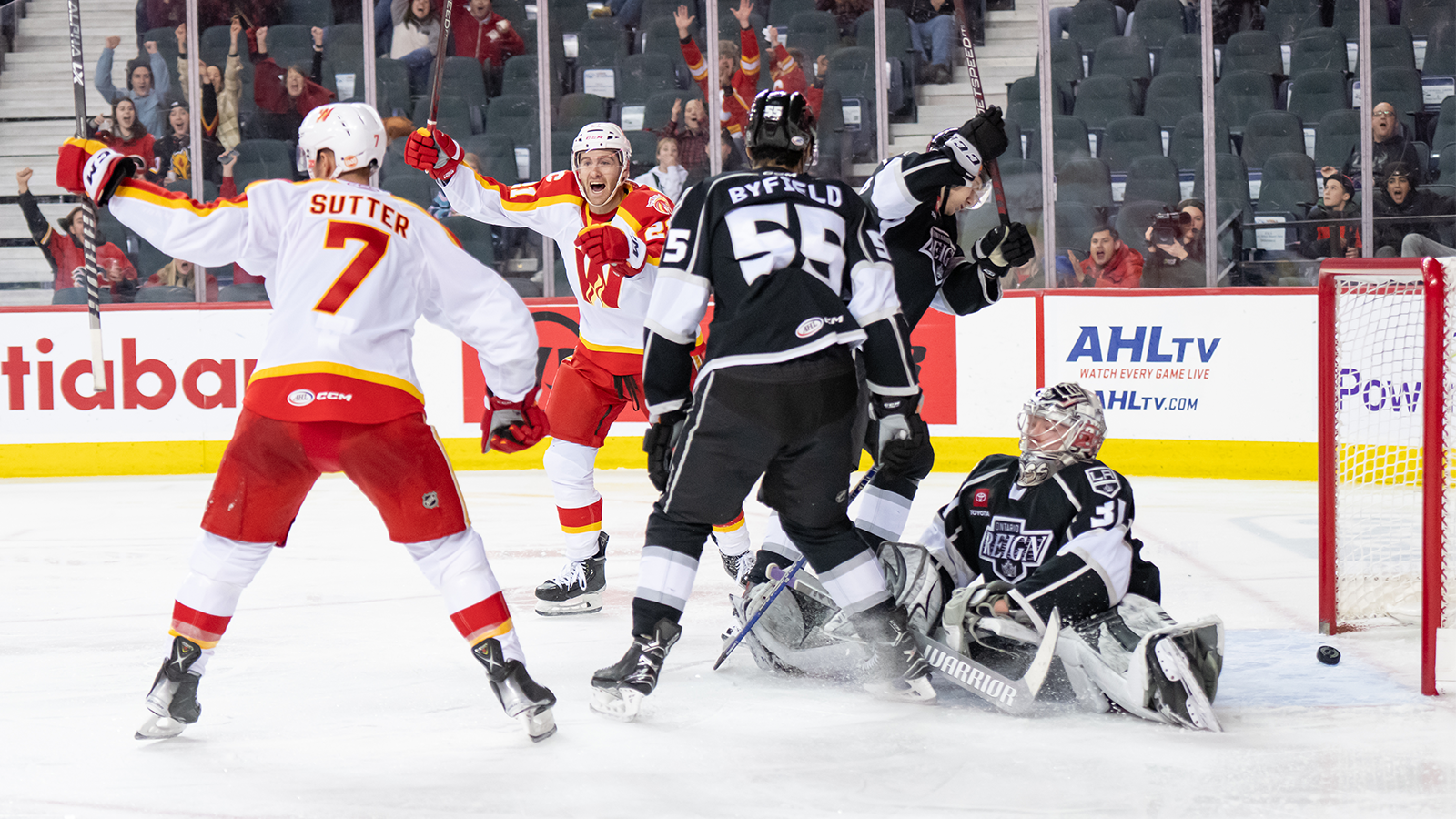 It was the second game of a back-to-back series against the Ontario Reign at the Scotiabank Saddledome, with the Wranglers celebrating captain Brett Sutter’s 1,000th AHL game.

Sutter scored in fairy-tail fashion and Kevin Rooney picked up his first goal since joining the Wranglers. Jakob Pelletier, Adam Klapka, and Connor Zary – with an empty netter –  to round out the scoring, as the Wranglers beat the Reign 5-2 to head into the Christmas break on a high note.

Dustin Wolf was a rock between the pipes once again for Calgary, turning aside 38 shots to record his 16th win of the season.

It would appear Ontario’s intention to start the game was to  ‘Reign’ on the parade … pardon the pun.

They came out of the gates quickly, peppering the net with pucks. The Wranglers did have an early powerplay in the first five minutes of the game, and wouldn’t you know it, Sutter scored, however, it was waved off due to a blown whistle.

Wolf was the main reason the Wranglers were still in it early on, making a series of big saves in the first period, facing 20 shots in the opening 20 minutes.

The Reign would keep pressing though and eventually took the lead on a powerplay of their own. Lias Andersson scored his seventh of the season to give Ontario the 1-0 edge heading into the intermission.

After killing off a Wranglers powerplay in the second period, the Reign extended the lead to 2-0, when Andersson scored his second goal of the game off a shot that floated over the shoulder of Wolf in rather fluke-like fashion.

However, in the late stages of the frame and with the crowd getting antsy, Pelletier finally put the Wranglers on the board with a quick shot from the circle, picking up his 11th of the season in the process.

The third period was a much different story, as the Wranglers scored three goals in a span of 2:17 to turn the tide in the contest.

Just over two-minutes into the period, Calgary would tie the game off a quick shot from Klapka, who used his long reach to turn the puck over, swatting it away from the defender, then walking in on net and sniping his second goal of the season.

The flood gates opened after that.

In story book fashion and with the Wranglers shorthanded, Sutter took a great pass from Rooney in the high slot and ripped home his sixth goal of the season to give Calgary the 3-2 lead.

Still shorthanded, the captain then returned the favour, as he set up Rooney who skated in and picked his spot, registering his first goal as a member of the Wranglers to extend the lead to 4-2.

Ontario pulled their goaltender with a little more than three-minutes to play in the game, and Zary took advantage, depositing the puck into the yawning cage.

Calgary heads into the Christmas break winners of three-straight, sitting second in the Pacific Division with a record of 18-7-1.