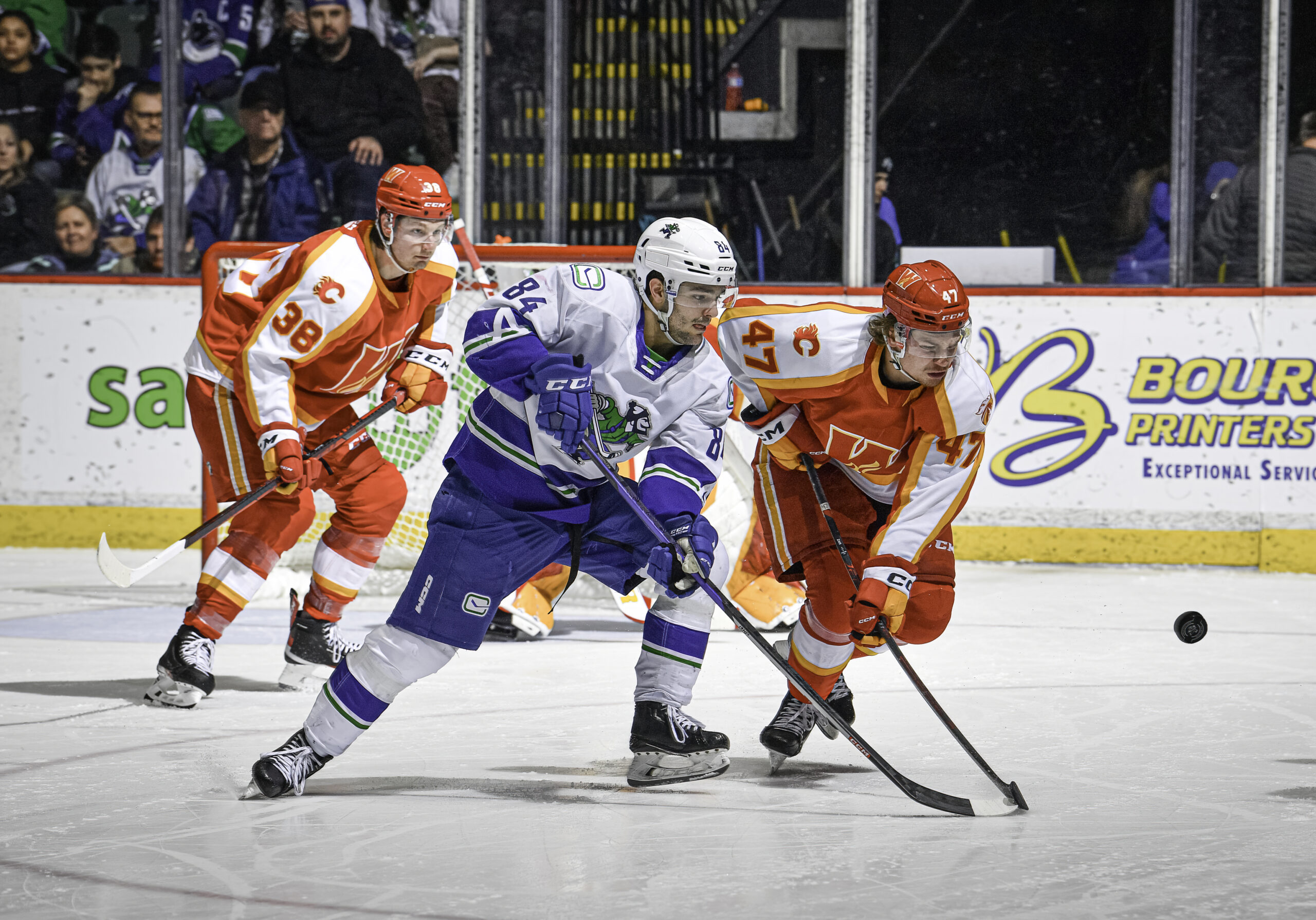 The Wranglers erased a three-goal deficit on the road to skate to a thrilling 5-4 shootout win over the Abbotsford Canucks on Friday night.

Connor Zary had a goal and two assists, Ben Jones scored his seventh of the season and now has points in back-to-back games (1g, 1a), while Nicolas Meloche found the back of the net in the contest as well.

Matthew Phillips scored his league-leading 23rd goal of the season to tie the game late for the Wranglers and would be the hero once again, this time in the shootout, scoring the deciding goal.

Oscar Dansk got the start in net for Calgary, making 25 saves to pick up his fourth win of the season.

The Canucks who struck first in this one. Kyle Rau scored at 15:05 of the frame, followed up by a powerplay goal from Justin Dowling just 17 seconds later to put the Canucks up by a pair. Phil Di Giuseppe added to the lead late in the period to give Abbotsford a 3-0 advantage at the break.

Down but not out, the Wranglers started the second period on the powerplay and they capitalized early. Just 1:26 in, Zary took a seeing-eye shot from the top of the circle that hit a body in front and popped over Canucks’ goaltender, Arturs Silovs, to get the Wranglers on the board. On the other end, Dansk made multiple highlight-reel saves to keep the game close and give the offense time to work.

Later, with less than five-minutes left in the period, Calgary converted twice in succession to turn the game around. First, Jones tallied with a nice shot from the slot at the 17:06 mark and Meloche followed up just 35-seconds later to tie the game.

The Canucks answered back early in the third period when Tristan Nielsen scored on a skillful backhand two minutes into the final frame to regain the lead.

However, with time ticking down in the game, the Wranglers advanced the puck up the ice quickly and Zary found Radim Zohorna with a quick pass, Zohorna then spotted Phillips crashing the net and sent a pass his way. Phillips was knocked down in front of the net but, while kneeling in the blue paint, swiped at the puck and backhanded it into the back of the net.

The Canucks had an abbreviated powerplay to start overtime, which the Wranglers killed off. Play was continuous throughout the extra frame, with not a single whistle required so, ultimately, a shootout would be required to determine a winner.

Zary and Poirier scored on their attempts for the Wranglers, so it came down to Phillips to be the hero, and he sent a low shot through the five-hole of Silovs to win the game.

The Wranglers and Canucks will meet for the final game of their three-game series on Saturday in Abbotsford at 8 p.m.