Wranglers Win Third In A Row Against Canucks 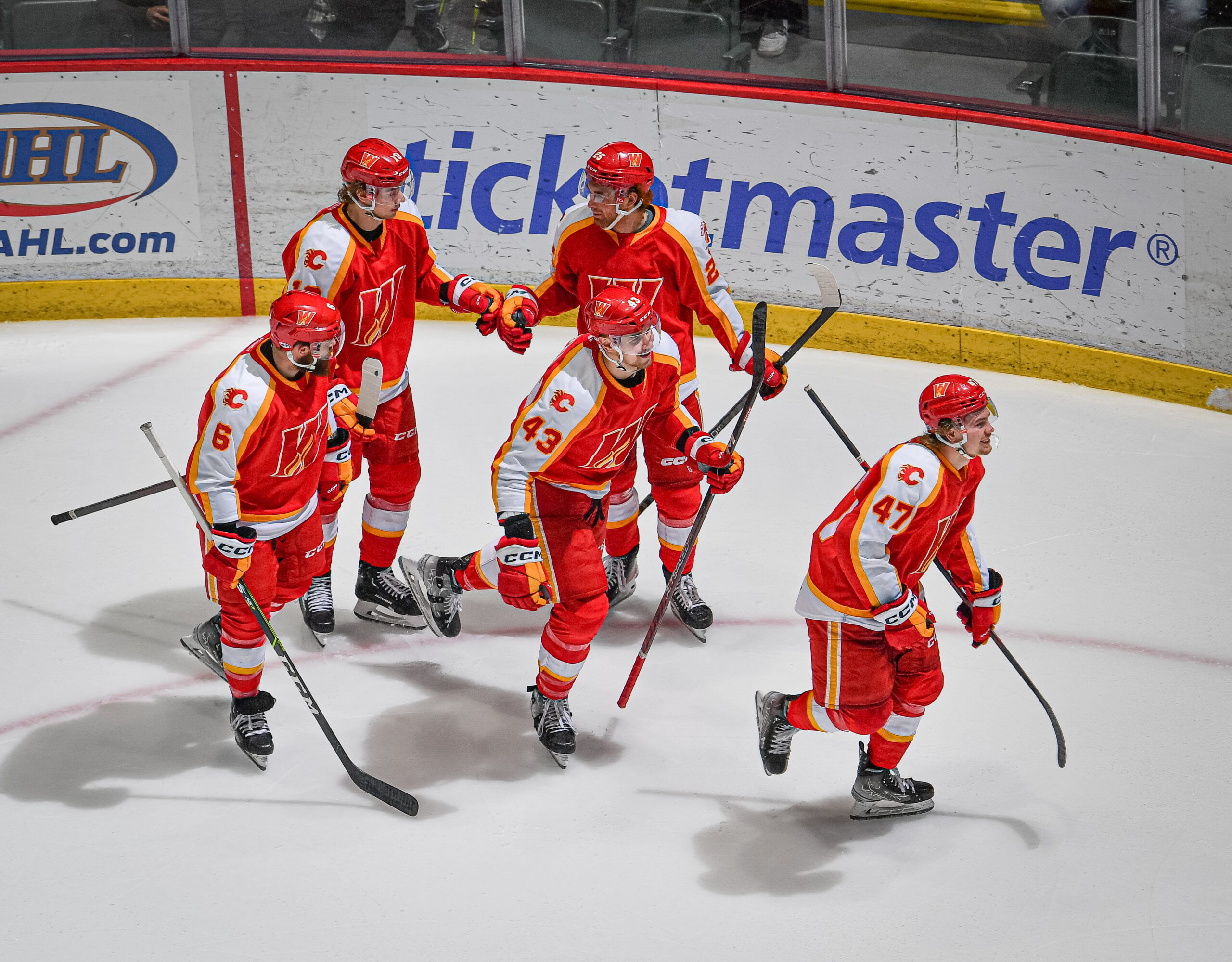 The Wranglers picked up their third-straight win on the road in Abbotsford, defeating the Canucks 5-3 on Saturday night.

Ben Jones scored a goal and added an assist, extending his point-streak to three games, and was named the game’s First Star. Mitch McLain and Brett Sutter each notched their ninth goals of the season, while Cole Schwindt tallied his 10th, which held up as the game-winner. Connor Zary scored his 14th goal of the season and has registered five points (2g, 3a) in his last three games against the Canucks.

Dustin Wolf was back between the pipes for Calgary, turning aside 32-shots to record his league-leading 23rd win of the season. In Wolf-like fashion, he made multiple massive saves in the game, including a jaw-dropping blocker stop near the end to preserve the Wranglers lead.

Calgary wasted no time getting on the board in the game, taking the lead just 43 seconds into the opening period. With the puck on his stick, Jones skated over the blue-line and sent a harmless looking shot on net, which alluded Artus Silovs over the right pad.

Abbotsford would answer back a few minutes later, however, as Linus Karlsson converted on the Canucks powerplay, tying the game with his 12th goal. Christian Wolanin picked up his 40th assist of the season on the tying marker.

The Wranglers would retake the lead midway through the second period, when McLain scored by driving the net and redirecting a well-placed back door pass from Jeremie Poirier into the net.

With a powerplay late in the frame, Zary took a perfect pass from Matthew Phillips off a faceoff win by Jones to extend the lead.

Abbotsford would answer back before the period was out, as Vasily Podkolzin netted his sixth goal to draw the Canucks within one.

3-2 headed into the third period.

Midway through the final frame Schwindt lit the lamp with a laser beam shot under the bar to give the Wranglers a bit of breathing room. Then the captain, Sutter would add some insurance with an empty-net goal to extend the Wranglers lead to 5-2.

Wolf was spectacular in the final minutes of the game. With the Canucks attacking late, Danila Klimovich and Nils Hoglander connected multiple cross-seam passes, eventually setting up Wolanin with a wide open net, but Wolf dove across the yawning cage in super-human fashion to get his blocker on the shot and make it a certifiable candidate for ‘Save-of-the-Year’.

The Canucks would add a late goal from Klimovich, but it was too little too late.

It’s the Wranglers 27th win of the season, tying them for the most wins in the AHL. They head home for a two-game set at the Scotiabank Saddledome against the Ontario Reign beginning on Jan. 24.