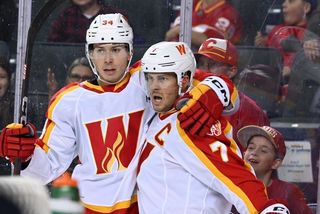 The Wranglers took on the Coachella Valley Firebirds for the second-straight night on Monday at the Scotiabank Saddledome with the ‘Birds picking up the victory 3-1.

Brett Sutter scored the lone goal for the Wranglers.

The Firebirds capitalized on a Wranglers turnover which lead to a breakaway for a 1-0 lead.

Calgary took two straight penalties in the back half of the period, with the latter leading to a goal by Kole Lind, his fifth point in the last two nights.

The Firebirds outshot the Wranglers 14-2 after 20 minutes and led 2-0.

The Wranglers got a powerplay early in the second and managed five shots but couldn’t solve Firebirds goaltender Joey Daccord.

Coachella Valley found the back of the net again towards the back half of the period after the puck took a bad bounce off the endboards.

Sutter broke the goose-egg five-minutes into the third. He threw a huge hit on the forecheck and then finished off the play with a nice move to the forehand and make it 3-1.

The Captain is off to a hot start with four points in the first two games! Here is his goal from last night! #JoinTheHerd pic.twitter.com/ssUJTeYgU6

Calgary had a powerplay with 4:55 remaining and despite a few quality scoring opportunities couldn’t find the twine.

They pulled Wolf with 2:30 left but couldn’t beat Daccord.

Calgary went zero-for-three on the powerplay while killing four of the five penalties they took.

The Wranglers are back in action Friday when they hit the road for the first time to battle the Colorado Eagles.