Calgary, AB – The Calgary Wranglers unveil today their home and away jerseys for the 2022-23 inaugural season in Calgary. 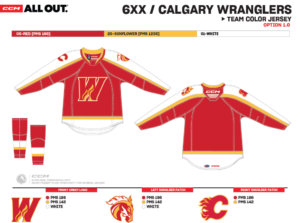 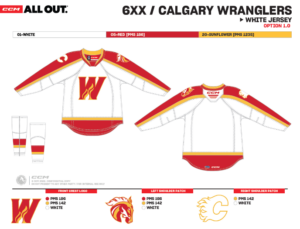 On August 2, 2022, The Wranglers, American Hockey League affiliate of the Calgary Flames, become the second team to don the name in Calgary following the Calgary Wranglers of the Western Canadian Junior Hockey League (WCHL) who came to Calgary in 1977. The WCHL Wranglers played in Calgary for ten seasons, graduating such Flames alumni as Kelly Kisio, Dana Murzyn, and Mike Vernon to the National Hockey League.

The Calgary Wranglers jersey brings a fresh, new look to the original Wranglers logo and jersey design that had a significant era in Calgary hockey history.

New Wranglers merchandise is available at all CGY Team Stores and FanAttic retail locations. Retail jerseys will be available for sale within the coming weeks.

Last season, Calgary’s American Hockey League affiliate finished second in the AHL with a record of 45-16-7 for 97 points, winning the Pacific Division and earning their way to the Western Conference Finals of the Calder Cup Playoffs.

In operation since 1936, the AHL serves as the top development league for all 32 National Hockey League teams. Nearly 90 percent of today’s NHL players are American Hockey League graduates, and more than 100 honored members of the Hockey Hall of Fame spent time in the AHL in their careers.