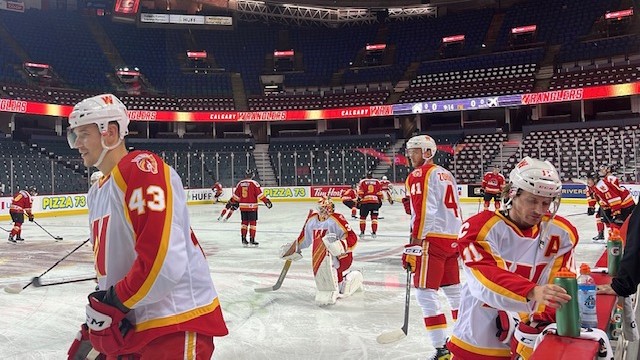 The Wranglers hit the ice for the first time Tuesday night as they beat the University of Calgary Dinos 7-0 in their only exhibition game before the home-opener Sunday afternoon at the Scotiabank Saddledome.

They iced what is likely close to their starting lineup for that tilt, with a top trio of Jakob Pelletier, Connor Zary and Matthew Phillips.

Dustin Wolf started in net for the Wranglers, stopping all three shots he faced before being relieved by Oscar Dansk halfway through the second period.

The play was dominated by the Wranglers in the first, where they outshot the Dinos 22-3 but couldn’t solve Dinos second-year goaltender Carl Stankowski.

But the flood gates opened early in the second.

Ben Jones found the back of the net in the first two minutes of the period off a nice pass from Josh Brook.

Shortly after that, Adam Klapka put the puck home, the helpers going to Rory Kerins and Nick DeSimone.

It wasn’t long after that the Wranglers picked up their third as the top line connected – Zary potted one with assists from Pelletier and Phillips.

They finished off four goals in four minutes as Brett Sutter put one home from the slot from Walker Duehr.

The Wranglers struck on their third powerplay of the night as Jones picked up his second to make the score 5-0 heading into the final frame.

The Dinos came out with a little fire to start the third getting a couple quality opportunities on the powerplay but Dansk was there to shut the door.

Cole Schwindt got on the scoresheet halfway through the period, while Jones and DeSimone both picked up their third points of the night with the assists to make the score 6-0.

Zary picked up his second of the night shortly after with assists to Josh Brook and Simon Lavinge to round out the scoring.

The Wranglers finished the night one-for-three on the powerplay while killing off all three penalties they took. The final shots were 45-10.

The home opener Sunday is 1 p.m. as the Wranglers take on the Coachella Valley Firebirds.