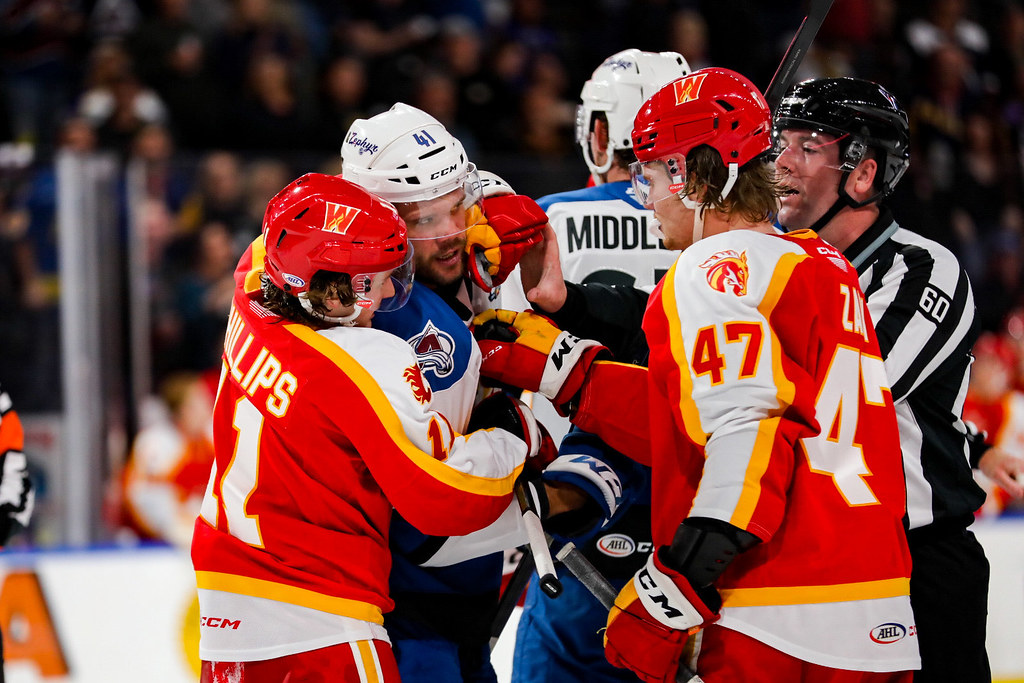 The Calgary Wranglers fell 6-2 to the Colorado Eagles in the club’s first road game under their new moniker.

With the loss, they drop to 0-3 on the campaign.

Radim Zohorna and Adam Klapka scored for the Wranglers, while Oscar Dansk made 24 saves.

The visitors had their chances in the opening frame, outshooting the Eagles 13-11 after 20 minutes, but couldn’t beat Eagles netminder Justus Annonen.

Callahan Burke would open the scoring for the home side at 10:31 of the opening stanza with an unassisted marker to give them a 1-0 lead at the intermission.

Special teams played a big role in the second period, as both teams traded opportunities on the man-advantage.

The Eagles were the first to strike on the powerplay, when Charles Hudon took a pass from Shane Bowers, finding the back of the net at the eight-minute mark to extend the Eagles lead.

Colorado would score three-straight goals in the second period, two from Charlie Hudon –  both on the power-play –  and the other from Oscar Olausson, to build a substantial four-goal cushion.

In an attempt to spark his team, Alex Gallant dropped the mitts with Eagles forward Keaton Middleton for a spirited scrap, with Gallant eventually taking down his opponent.

Not long after, the Wranglers would get on the board on the powerplay, as Zohorna completed a tic-tac-toe play, tapping in a hard backdoor pass at the side of the net.

With momentum beginning to shift late in the period, the Wranglers were swarming around the net, when Jakob Pelletier had a great chance in the slot, but was robbed by the blocker of Annonen with only 11 seconds left on the clock.

Colorado forward Anton Blidh put a stop to any potential Wranglers’ momentum in the third, scoring twice in the final frame, including a powerplay tally, to ultimately put the game out of reach.

Late in the contest, Klapka would tally his first goal of the season with 2:27 to go on a powerplay.